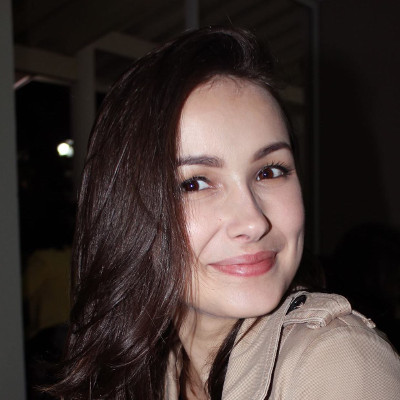 Naturally, more and more people are questioning how much it costs to make an app. Many factors can influence the price, including the app's complexity, the tech stack being used to build it, and the experience of the developers working on it. So, let's clarify and understand the variables that affect the app development cost.

Going straight to the point: the average cost of making an app ranges from £10K to £200K+, depending on what type of app you want to create:

What determines the cost of an app?

There are many factors that play a very important role in the cost of developing an app.

When you want to build complex features or integrate with multiple platforms, the development process can take longer — which gets factored into the cost.

So, if you're looking to keep your development costs low, try avoiding these complexities mentioned above, or be ready to pay a hefty sum for your dream mobile application.

In most cases, you will want your app to be available for both iOS and Android devices. That being said, you might be asking yourself: will I need to pay twice as much to have my app built for both platforms?

The good news is: probably not.

While iOS and Android indeed required different programming languages, there are new technologies now available that allow developers to build apps for both Android and iOS at the same time. These are called hybrid apps or cross-platform apps (instead of traditional native apps that are built specifically to a single platform).

For highly-complex projects that demand very high performance and bullet-proof cybersecurity, such as financial and banking apps, a native app might be more suitable – so you'll need to pay twice as much to have both your Android and iOS apps developed.

Generally, though, a cross-platform app will provide a much more efficient solution as they are faster and cheaper to build, with increasingly high-performance levels. React Native (which is the hybrid technology we use at CodeLeap) enables developers to write code for iOS and Android simultaneously, which lowers the total development costs and time while maintaining excellent quality and reliability.

Feel free to reach out to a member of our team and discuss your project with us!

If your app requires a very sophisticated design and user interface, it's very likely that your project will cost more. But why?

In technical terms, we call it UI/ UX (User Interface and User Experience) and it determines the look and feel of your app. Have you ever used an app that felt somewhat cheap and incomplete? That's probably because they didn't invest enough time and effort in UI/UX.

When it comes to this, details make all the difference – and details take time. Since development time is the key driver for calculating an app's cost, you can expect that a highly sophisticated mobile application will come at a significantly higher price (often more than doubling the total development cost).

Who will build your app affects the cost as much as the complexity, platform, and design.

Thousands of companies worldwide claim to be the best app developers and guarantee they can deliver the best solution. But how do you know what they're actually capable of delivering? Luckily, there are some factors we can look into that help answering this question.

To start with, the price point is generally a very good indicative of quality – as a rule of thumb, if it seems too good to be true, it probably is.

In addition to price, the location and market positioning of the development company does influence quality and pricing a lot. Let's take a look into that.

In the chart below, development companies are broadly categorised into three groups. This is specially relevant if you're based in the UK, since you'll have access to a great local talent pool that the country has to offer.

Take a look at the average hourly development cost in each of these categories: 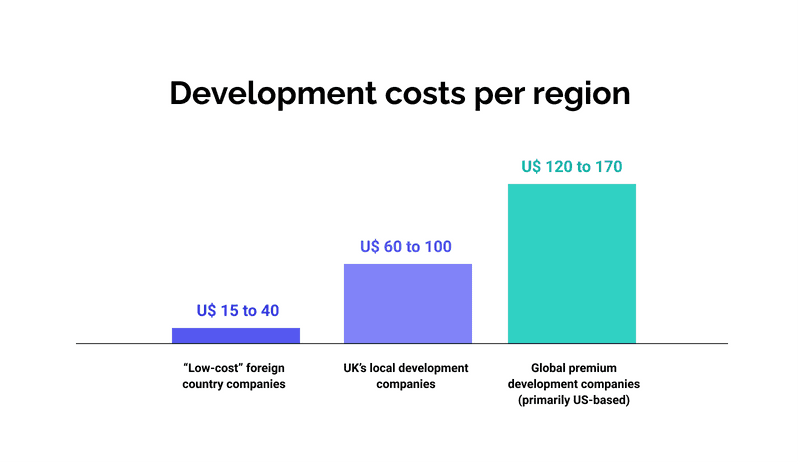 Alright, so why are these prices so different and what can I expect from a company from each of these categories?

To start with, there is of course a big variance in quality and price even within each of these segments (and they are often not very easily boxed into categories), so we'll only be talking about you can expect on average from each type of company.

In order to build apps at such low prices, these companies – which are often located in countries such as India, Ukraine, Philippines, etc – need to hire largely unexperienced developers who need to rush at their maximum speed to develop projects quickly and get started with the next one. Companies often don't seek long-term engagement, which is crucial for building any scalable mobile application.

Beyond the immediate issues with performance, look and feel of your app, the main problems you will face with a low-cost app are in the long-run since it is actually more expensive to improve a low-quality app than it is to build a new good-quality one from scratch. This is because low-cost apps tend to be poorly-engineered for scalability and performance.

It can still be a good option for those who are on a budget and don't want to commercialise their apps yet, but be mindful about the long-term consequences.

Building an app with a UK-based company can be more costly than the typical low-cost locations but generally speaking, they do offer a good value for your money. Prices are not as high as other global agencies while the quality is still among the best – some of the world's best startups are based in the UK, so you can be sure there's a good supply of skilled engineers here! Companies such as Deliveroo, TransferWise, Revolut, Babylon Health and many more are UK-based with in-house development teams.

If you're based in the UK or somewhere else in Europe too, there are clear advantages to working with a regional company. Working with a team that knows the British and European markets and understand the quality standards is usually very beneficial for a smooth collaboration with your developers.

We believe that physical proximity simplifies communication too. When you're working with a local company, you can meet with the firm at various points during the process and this maximizes your chances of seeing a final product that accurately reflects your vision.

Premium development companies are located globally and serve clients from all continents, generally targeting large corporations (in the likes of Nike, Unilever, Shell, etc) or new businesses that can afford their high prices. They often have several offices spread across big cities such as London, New York, and LA.

It is undeniable that these developers are highly qualified and considered top-level talent, yet you'll need to spend at least £120k to build a simple mobile application – and if you're looking for something more complex, the price tag can reach well above half a million pounds.

Why are these companies so expensive?

Despite being very talented indeed, these companies benefit from higher margins due to their strong reputations. They are able to charge a higher hourly rate and consequently higher prices for their services. So, if collaborating with a well-known development brand is important to you, you've got to be prepared to spend more.

To sum it all up

So, how much should you budget for your app? As we've seen above, lots of different factors impact the cost.

It depends on how complex your app is, what type of platform you'll use, how good the design needs to be and – last but not least – which company builds your app.

To put it into perspective, the cost ranges from £10K (for simple MVPs) to £200K or more (for very complex apps).

Now that you know what types of apps can get built based on the price, it will be much easier for you to start your development process. A well-built app can produce a great return on your investment.

Interested in learning more?
Contact us
or
qet a quote now!
HOME
SERVICES
PORTFOLIO
PRICING
ABOUT
BLOG
CAREERS
CONTACT
hello@codeleap.co.uk
+44 (0) 333 050 9420
Made with ♥️ in London, UK
©2022 CodeLeap Ltd.
Visit us in Camden, London, UK.
CodeLeap Ltd. is registered in England & Wales, company no. 11967804.
This website uses third-party assets and software. By using our website you agree to the terms of use.